"Resilient Boston Harbor" lays out strategies along Boston's 47-mile shoreline that will increase access and open space along the waterfront while better protecting the City.

Mayor Martin J. Walsh today rolled out a comprehensive and transformative vision that will invest in Boston's waterfront to protect the City's residents, homes, jobs, and infrastructure against the impacts of rising sea level and climate change. Announced in his annual speech to the Greater Boston Chamber of Commerce, the Mayor's plan, "Resilient Boston Harbor," lays out strategies along Boston's 47-mile shoreline that will increase access and open space along the waterfront while better protecting the city during a major flooding event. 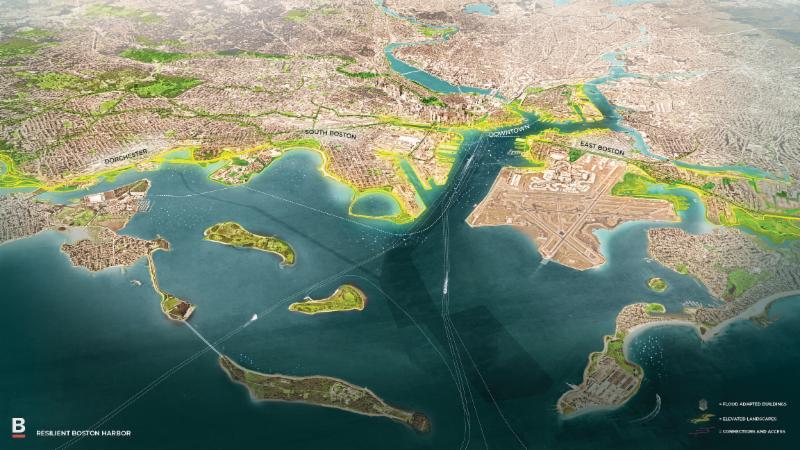 "We're not just planning for the next storm we'll face, we're planning for the storms the next generation will face," said Mayor Walsh. "A resilient, climate-ready Boston Harbor presents an opportunity to protect Boston, connect Boston, and enhance Boston, now and for the future. As we enter a new era in our Harbor's history, Boston can show the world that resilience is not only the ability to survive adversity, but to emerge even stronger than before. That's the promise of a Resilient Boston."

Resilient Boston Harbor builds off of Imagine Boston 2030 and uses the City's Climate Ready Boston 2070 flood maps and coastal resilience neighborhood studies to focus on Boston's most vulnerable flood pathways. The strategies laid out in the plan include elevated landscapes, enhanced waterfront parks, flood resilient buildings, and revitalized and increased connections and access to the waterfront. The strategies will require collaboration and funding between federal, state, private, philanthropic and nonprofit partners.

Based on early recommendations from the City's Climate Ready Charlestown and Climate Ready East Boston plans, a deployable floodwall system has been installed across the East Boston Greenway, and a section of Main Street in Charlestown is being elevated. Additional measures identified include:

Released today, Climate Ready South Boston identifies the major flood pathways to many of the City's residential neighborhoods through Fort Point Channel and Moakley Park. In response, the following strategies have been identified:

Resilient Boston Harbor builds on the investments the City of Boston has made under Mayor Walsh to increase the City's climate resiliency, including:

The projects outlined in Resilient Boston Harbor will require a number of different funding sources. Mayor Walsh announced that the City of Boston will commit 10 percent of all new capital funding to resilience projects. He called on Boston's state and federal government partners, as well as the private sector and non-profit and philanthropic stakeholders to join the City in committing to make these necessary investments a reality.

The strategy builds on the City of Boston's Resilience Strategy. Boston's resilience strategy is focused on ensuring every resident can reach their full potential regardless of their background, and removing the barriers of systemic racism that hinder Bostonians from having access to opportunities.

"We have an economic and moral imperative to act on climate change," said Senator Edward J. Markey. "This requires leaders at all levels of government and our business sector to work collectively to address the challenges facing our communities. As the Co-Chair of the U.S. Senate's Climate Change Task Force, I am committed to standing with local leaders, like Mayor Walsh, to be the strong federal partner our residents need as the world continues to warm and sea levels rise."

"Building a resilient city is a serious challenge in response to a sobering threat, but it also brings enormous opportunity to re-think our relationship to the Harbor and create a world-class waterfront," said Kathy Abbott, President and CEO of Boston Harbor Now. "We commend Mayor Walsh for seizing this moment to design a waterfront that is more accessible, beautiful, and inclusive than ever before. The urgency of climate change requires all of us to step up and work together like never before."

"Resilient Boston Harbor will not only strengthen the City against the impacts of climate change, it will create a fantastic urban waterfront, opening up many new opportunities to improve public access to the Harbor," said Bud Ris, Senior Advisor to the Boston Green Ribbon Commission. "Based on all of the analyses that have been done through Climate Ready Boston so far, this is exactly the kind of approach Boston should be taking. We look forward to continuing our partnership with the City to make Resilient Boston Harbor a reality."

"Given the urgency needed to address climate change, it is exciting to see the City of Boston put forth such a bold vision for the future," said Rebecca Herst, the Executive Director of the Sustainable Solutions Lab at UMass Boston, "This is a real opportunity to keep Bostonians safe from flooding and invest in our communities. With strong leadership, driven by scientific research, policy analysis and deep community engagement, we can ensure that all Boston residents, not just those with means, are prepared for climate impacts."

"I want to thank Mayor Walsh for launching Climate Ready Dorchester," said District 3 City Councilor Frank Baker. "I look forward to participating in that process and encourage my constituents to get engaged and discuss how we can increase access to our beaches while protecting our homes and roads from future flooding."

"I applaud Mayor Walsh for his continued efforts to make Boston resilient for future generations," said State Representative Adrian Madaro. "Climate change is one of the greatest challenges facing our City and our planet. The plan announced today will not only protect Boston's waterfront neighborhoods, but will also improve the quality of life for our residents."