An ode to community: The religious feasts of Boston’s North End

From watching a game at Fenway Park to sailing on the Charles River, summers in Boston are defined by a variety of activities and customs. In Boston’s North End neighborhood, summers revolve around one thing: feasts. Join us as we examine the religious feasts of Boston’s North End neighborhood as an emblem of the Italian-American identity and experience.

Beginning on the first Sunday of June and ending on the second Sunday of September, weekends in the neighborhood of Boston’s North End are filled with food, music, and dancing. These religious celebrations, lasting from one to three days, are held to venerate the different Catholic saints and organized by a range of private volunteer groups.

Scholars like Anthropologist Augusto Ferraiuolo consider the festival to be a source for both creating and affirming the Italian American collective identity. According to Ferraiuolo, these summertime feasts gather the North End community around the traditions of their home country and serve as an annual reminder of the neighborhood’s common cultural upbringing.  Colorful parades, live marching bands, and Italian street food vendors all contribute to a sense of “communitas,” or shared intimacy between people who are experiencing cultural transition as a group.

This sense of “communitas” among Italian Americans in the North End began to take shape between the years of 1880 and 1921 , when Italian immigration to the United States reached its peak. In 1890, Italian immigration to Boston reached around 4,700, with many filling the tenements of the City’s North End. By 1920, over 50 percent of the Italian immigrants in Boston resided in the North End. As Italians settled into the North End, they integrated traditions of the old country into their new living space. Throughout the 20th century, key features of the Southern Italian religious feasts like the procession of the saint statue and symbolic offerings to the saint remained staples of the festivals.

In an oral history interview from the 1970s, North End residents Emma C. Bussey, Caroline Esposito, and Milly Storella remember the religious festivals and their accompanying traditions as being an ever-steady presence in the neighborhood since their births. The women specifically recall making symbolic offerings to the various saints during these feasts. Caroline Esposito, referred to as Subject #3, describes giving money to the statue of St. Anthony that comes up to her window every year.

The women also describe the Feast of Saint Agrapina’s trademark statue that is paraded during the procession portion of the festival. 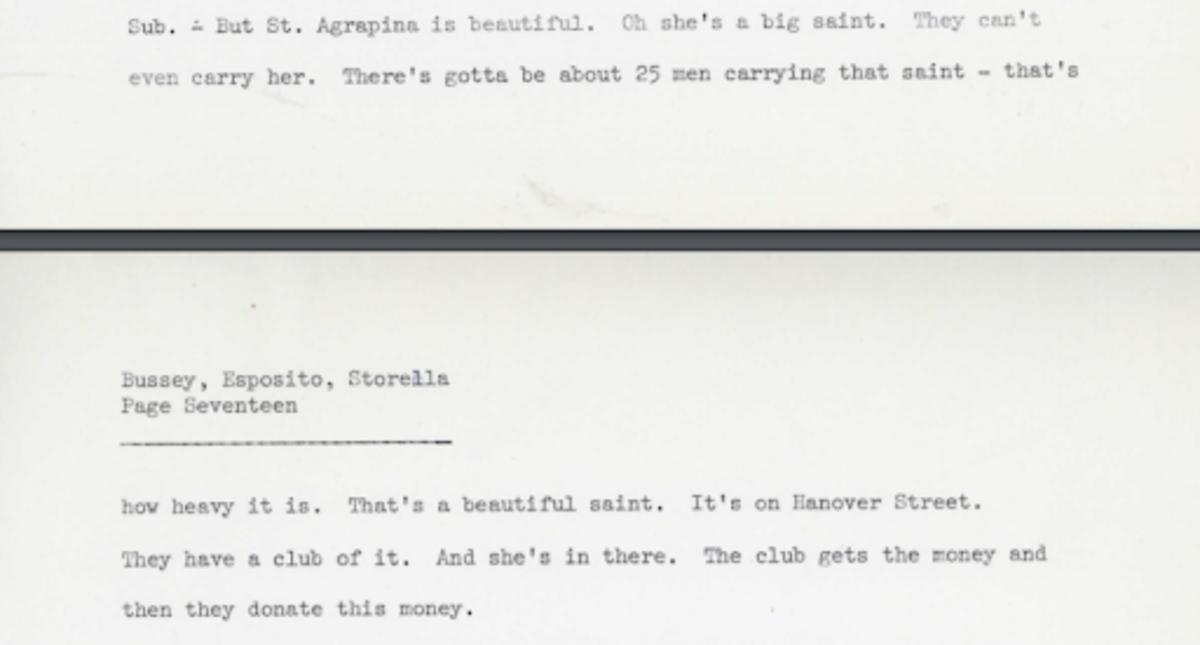 Another oral history interview taken around the same time captures the longevity of the North End festivals traditions. Mr. and Mrs. Luciani describe their experience at the Feast of Saint Anthony, noting the parade of the saint as the main activity. They reflect on the many people that would come and put money on the statue as offerings.

Such discussions show how these North End religious feasts helped cement the traditions and customs of Southern Italy brought to America nearly a century before these interviews were held.

Religious feasts and their accompanying traditions also provided a prime opportunity for the next generation of Italian-Americans to become familiar with their cultural background. Mr. and Mrs. Alfred Luciani remembered taking their child to the festival even after living outside the North End for some time.

Both Mr. and Mrs. Luciani had grown up in the North End but decided to move after the birth of their son. Despite raising their son outside of the North End, the festivals, as the Luciani’s described, provided a chance to reintroduce their son to the family’s Italian-American roots. Together, they would embrace the sights, smells, and tastes of the feast. The Lucianis reflect on buying all kinds of treats, including figs, chestnuts, and pizza.

For entertainment, the Lucianis recall taking their son to watch the public saint reenactment known as the “flying angel.”   According to the Lucianis, this spectacle took place right on North End Street and was one of the major thrills of the festival, noting the claps and sighs of relief from the captivated crowd. 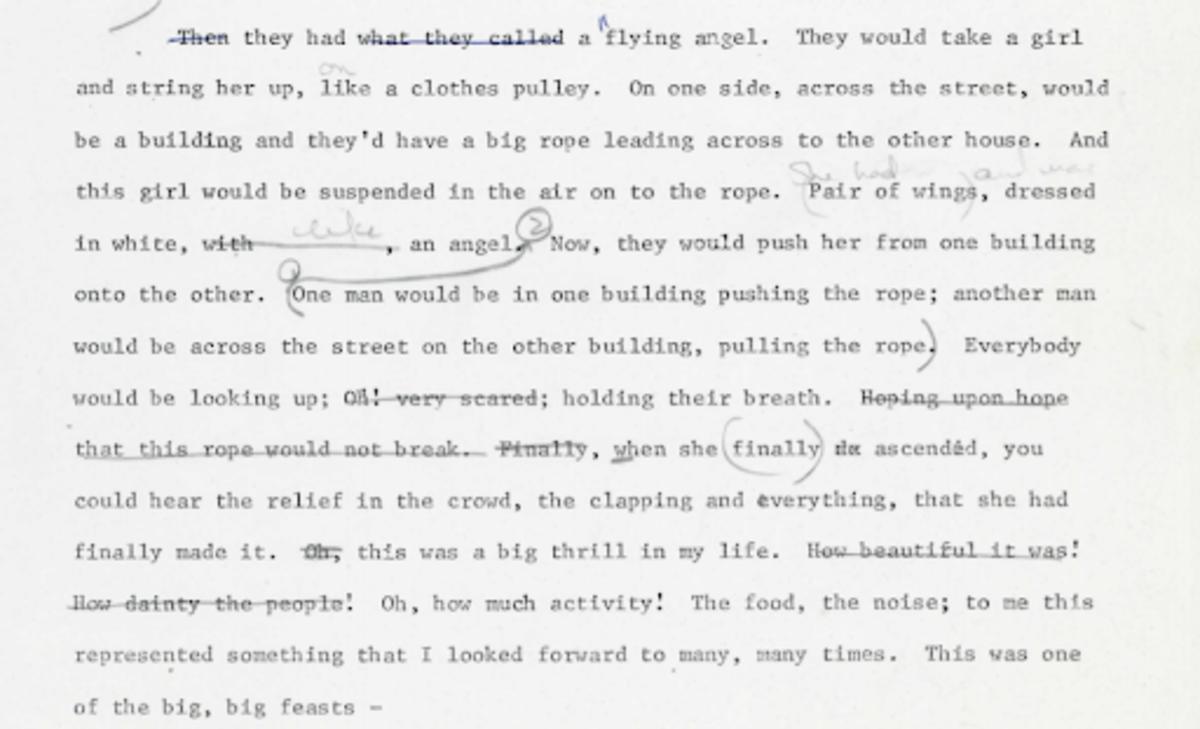 Their son also participated in the marching band that played during the procession of the saint statue. Engaging with these festival traditions, their son became immersed in the same cultural and religious aspects of the North End that shaped his parents’ experience living in the neighborhood. Returning to these feasts each year, the Lucianis were able to reacquaint their child with the family’s Italian-American identity.

However, these traditions were not practiced in a vacuum. As decades passed, the feasts also became a reflection of the unique experiences Italian immigrants shared living in America. As a child, North End resident Ann Antonio remembers partaking in unique feast traditions that her family developed after immigrating and settling in the North End. She discusses her family’s connection to Saint Joseph and the special ways her mother prepared for the feast.

Ann details the variety of foods her mother prepared, which ranged from vegetables and fruit to fish and bread.  She also discusses other niche traditions like their family’s saint reenactment and how her family would open their house to all who wanted to join in the celebration. 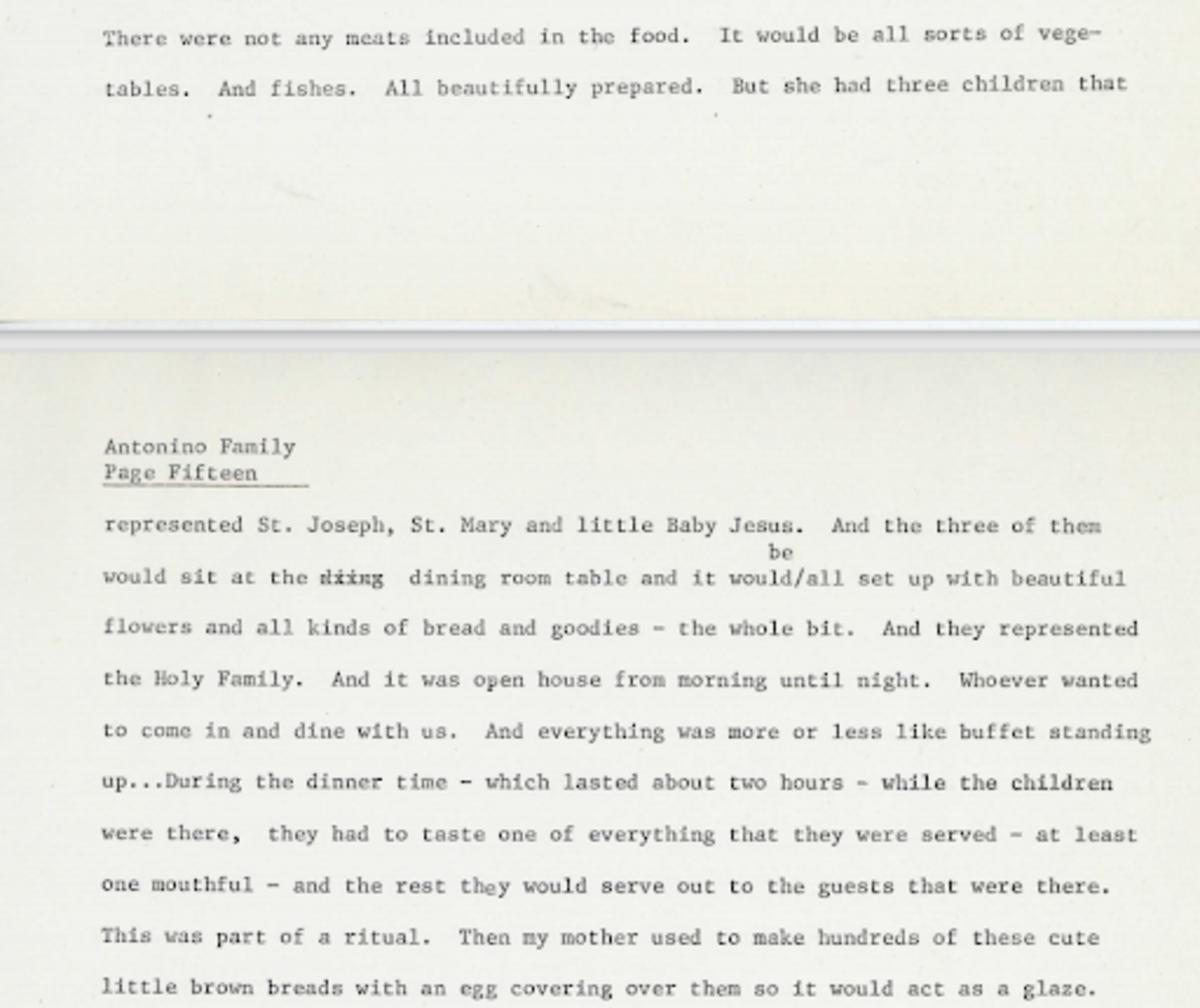 Ann describes the elaborate manner in which her mother decorated her house to honor St. Joseph. She specifically remembers one year that her mother erected an arbor-like structure as part of the family’s saint reenactment.

Over the years, North End feasts have come to represent a balancing act between the influence of American political, social, and cultural trends and the determination to maintain distinctive Italian values. Nothing perhaps resembles this balance best than the range of scores that the marching band selects from during the procession. From the 1950s Italian film song “Vitti 'na crozza” to the "Godfather" theme song, the marching band is a dulcet illustration of the cultural integration that has defined the Italian-American “communitas.” The procession has also included a paying of respect to firefighters, a spin-off of the original Italian tradition in which the saint pays respect to the elder members of the community. These adaptations are viewed as an implicit homage to the heroism and patriotism associated with American culture.

Ryan Metz is a current student at Boston University where she studies history.