One of the more unusual things you can find in Mount Hope Cemetery are the zinc markers — known to those who love them as "zinkies".

Walking through Mount Hope Cemetery, you may see a set of grave markers that really stand out. Back in the 1870s, a new form of grave marker came on the market. Instead of a stone marker, you could order a less expensive monument made of zinc (which is among the lowest-priced metals).   The creators of these monuments sand-blasted the zinc to create a matte finish meant to resemble stone.  The marketing played up the lower cost and suggested that these metal markers would actually be much more durable than stone (even as durable as the pyramids).  The marketing materials referred to the metal as “white bronze” – which had a classier ring to it than zinc. There was also an element of modernity to using zinc that appealed to some people in the late 19th century. 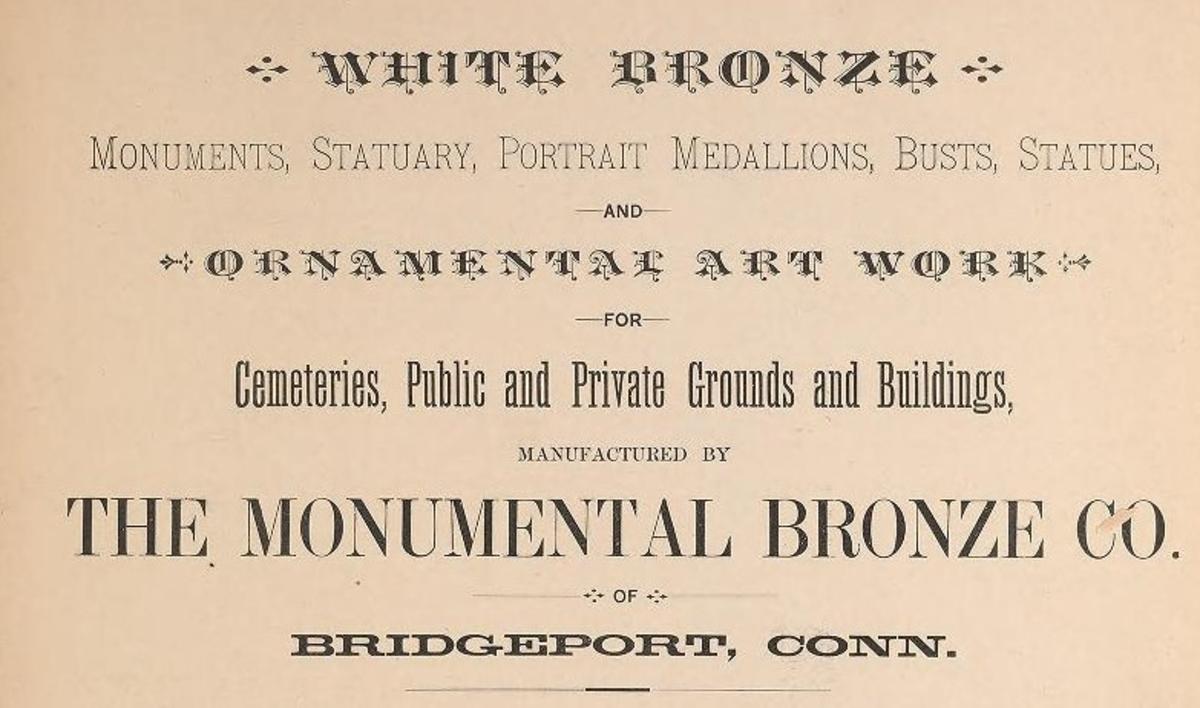 The zinc monuments in Mount Hope do indeed look quite crisp after over a century of being out in the weather. It’s likely most of these came from the Monumental Bronze Company in Bridgeport, CT, but the company did have subsidiaries in other states and in Canada. This company produced zinc grave markers from 1874 to 1914. Their claim was that their zinc monuments were “imperishable by nature, and ever enduring in beauty”. To get the distinctive blue-gray color, the metal would be cast and then sand-blasted. Next, the surface would be covered with linseed oil and hit with steam under high pressure (50 pounds per square inch). This process was called “steam bluing”.

The zinc used was nearly 100% pure, and it has stood the test of time. Zinc does not oxidize (as do some metals) neither does it have issues with lichen or moss, which can often be seen on old stone markers. Zinc is, however, brittle in the cold and can sometimes crack due to weathering. These monuments are hollow, so very large ones sometimes sag and need an internal structure added for support. In Mount Hope a few finials on the top have cracked and fallen off.

Another cost savings for the Victorian buyer of a zinc marker was that, unlike with stone carving, there wasn’t a charge per letter.  As long as the inscription fit on the panel, you could put as much wording on it as you wanted!  If you wanted multiple panels, that was perfectly fine, as well. When purchasing a zinc monument from one of the company’s agents, buyers could choose from a wide array of decorative elements directly from the catalog. The zinc monuments in Mount Hope display some of these options, including urns, initials, religious elements, and insignia of fraternal orders. Because these zinc grave markers could be easily customized, each is relatively unique, in that it incorporates the combination of features chosen by the buyer.

Some of the private garden cemeteries in the Boston area, like Mount Auburn, did not allow metal monuments (with the possible exception of bronze) because they were considered “cheap”. Since Mount Hope is a public cemetery, there was less need to cater to wealthy buyers with expensive taste in markers.   Current cemetery buffs like to call these monuments “zinkies”. Now, as you walk around Mount Hope, you will discover these remarkable objects. It's possible you may also become a zinkie aficionado.

Written by Gretchen Grozier, edited by Sally Ebeling in May 2022