This post in the Stories from Mount Hope blog brings us the story of a touch of Egypt in Roslindale.

Prior to 1800, most Americans knew practically nothing about Egypt. Likely familiar with the Biblical story of Moses and the Israelites, people had little additional knowledge of Egypt—either ancient or modern. All that changed after Napoleon Bonaparte’s occupation of Egypt (1798 – 1801).

Americans’ interest in the land of the pharaohs was ignited practically overnight. In the first 20 years of the nineteenth century, references to Egypt in newspaper and magazine articles became increasingly common, and travelers to Egypt created a burgeoning market in the United States for travel books. Egyptian symbolism (sphinxes, scarabs, and lotus) could be found everywhere—from furniture to fashion. “Egyptomania” had exploded.

But nowhere was the influence of Egyptian style more prevalent than in American funerary practices. In addition to the popularity of enlisting Egyptian symbols for cemetery gateways (the winged globe on the cornice of Cambridge’s Mount Auburn Cemetery and Boston’s Old Granary Burying Ground) and public memorials (the Bunker Hill Monument obelisk), the influence of Egypt penetrated the realm of private memorialization and even the physical care for the dead.

A lovely example of a private memorial influenced by the Egyptian style can be found in Mount Hope Cemetery’s stunning Poole/Boyko crypt. The tomb is located on Pilgrim Avenue near Central Avenue, not far from the wooden bandstand.

The shape of the Poole/Boyco memorial is common to that of many Egyptian revival tombs of the nineteenth century. The flat-roofed, rectangular structure with inward sloping sides is reminiscent of an Egyptian mastaba (meaning “house of eternity” in the ancient Egyptian language). Mastabas were the standard type of tomb in pre-dynastic and early dynastic Egypt for both the pharaoh and the social elite. (The mastaba later went out of fashion and was replaced by the pyramid—a form that is now synonymous with Egyptian tombs.) Mastabas were initially constructed of bricks made of sun-dried mud from the Nile River. The exterior side and back walls of the Poole/Boyco tomb are fashioned from multi-colored stone arranged in a seemingly abstract pattern, which may refer to the mastaba’s brick-layer construction.

Framing the crypt’s door are two lotus capital columns. In the Poole/Boyko tomb, both the capital and base of the columns are imprinted with the image of closed lotus buds. (Today the lotus is more commonly referred to as a water lily.) Above the door is an engraved winged globe, which was an ancient Egyptian symbol of royalty, power, and divinity.

But perhaps the most striking feature of the tomb’s façade is the beautifully detailed mosaic work. Some of the shapes and images you can pick out include lotus flowers floating on top of stylized waves, bull’s-eye circles twisting into each other, and at the very top of the mosaic panel, vertical stripes, which frame the winged orb above the door. Even more than 100 years after its construction, the colors remain vivid. 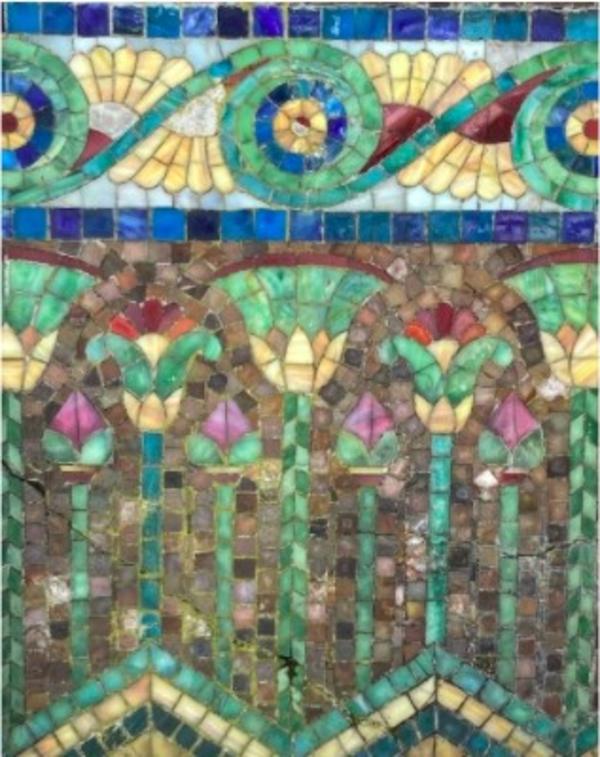 Egyptian revival architecture did have its critics, many of whom found references to ancient Egyptian polytheism inappropriate for American cemeteries. That’s what makes Mount Hope’s Egyptian crypt even more unusual. As if the memorial’s designers were hedging their bets, a carved relief of the Holy Family (most likely added at a later date) can be found in the lintel above the crypt’s door.

Egyptian Revival gates can be seen at the Granary Burying Ground in downtown Boston and on other 19th century cemeteries in the area clearly exhibiting the rise of "Eygptomania " in our area.